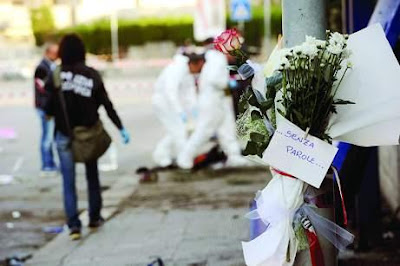 There's a few strange things about the bombing of an Italian school in Brindisi that many of you may have read about. First, let's be honest, things like this don't happen very often in Italy. It is a country with relatively little violence, few murders, and very rare terrorist attacks. Second, the school that was bombed was named after the wife of Giovanni Falcone, a policeman that is fondly remembered as perhaps the greatest anti-mafia crusader in Italian history. Falcone, like so many others of his kind, was murdered in 1991. Third, the bombing took place within days of the anniversary of his death. These facts add up to a pretty simple conclusion: the mafia did it.

Well let's think about this for a second. In southern Italy the mafia (in this case, the Pugliese Sacra Corona Unita) is not some sort of shady organization of outsiders and lowlifes. The mafia is comprised of neighbors, friends and relatives and maintains a certain respect that has a lot to do with its reputation as men of honor. Yes, they engage in criminal activity, and no, they are usually not interested in what's best for you, but as long as they keep some sort of order and do not permit random or senseless acts of violence, the public is generally content to let them be. In fact, if you read the news when Falcone was actually alive (or just check out Roberto Saviano's book Vieni Via con Me), you will have seen that the population didn't love him until after he died. They just saw him as poking a bee's nest, creating violence unnecessarily.

Given this, bombing a school and killing a young girl makes very little sense for the mafia. Low and behold, it wasn't them. Money quote:

'“There is a very low possibility of a mafia-type bombing.” “Sacra Corona Unita, as we were told some arrepentidos, is trying to regain the territory after the last blows through arrests and convictions, and seeks a social consensus that will not achieve with such massacres,” said sources of research.'

Turns out it was some guy who was mad at one of the girls in the school and murdered her, setting it up to look like an act of mafia terrorism. Aside from telling us that the mafia is not all that bad, this is just another reminder of in fact how bad the mafia really is. They are a fully functioning organization whose power not only in Italy, but globally, is hardly recognized by anyone outside of Italy. Even worse, they are so entrenched that the majority of Italians have become apathetic about it, just accepting their existence. That, at least to me, is terrifying.
Posted by Student in Rome at 2:57 AM