Lazio wants to win against Inter 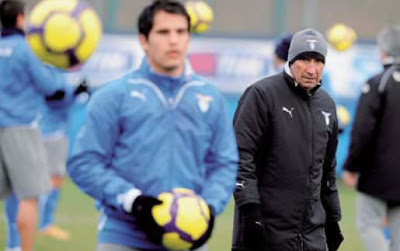 Or so says coach Edy Reja. This comes amid suspicion that Lazio will go down easily against Inter to prevent Roma from winning the championship.
Let's just say that Lazio rolling over would not only be gutless, but illegal in professional athletics.
Posted by Student in Rome at 12:56 PM No comments: 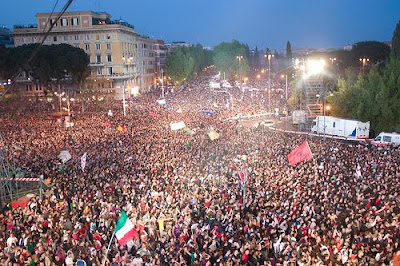 This Saturday, May 1st, is a holiday in Italy (their Labor Day) and is celebrated in Rome every year with a big free concert at San Giovanni. The lineup is mostly made up of Italian artists and the show will go on all day and even well into the night.
If you are not familiar with San Giovanni, it's just a couple stops from Termini on the Metro A, and has a lot of buses pass by it. Google map it here on our main page if your unsure. When you get off the Metro, just go under the old Roman aqueduct and you're there. It will probably be absolutely packed with people (that's last year in the picture above), so I am sure you won't have trouble finding it.
Posted by Student in Rome at 5:22 PM 1 comment:

Getting a job in Rome? 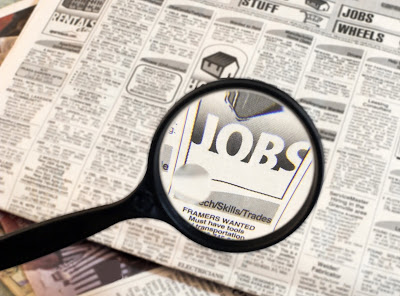 Did you know that you can work on a student visa in Rome? It's probably not the number one thing on everyone's mind, but a few spare euros never hurt anyone either. By law you are allowed to work 24 hours per week.
Just remember that things are very different in Italy from the North America (as well as Great Britain and Australia, I assume), so don't expect a minimum wage, or even any sort of legal contract. Bartender jobs, etc will probably not pay more than 5 euros an hour. However, you're drinking for free, so maybe it evens out in the end.
If you're considering it, the first place to look is Wanted in Rome, an English-language website devoted to those of us living and studying in Rome. Check it out, but just be wary, as always, of those trying to take advantage.
Posted by Student in Rome at 12:07 AM 1 comment: 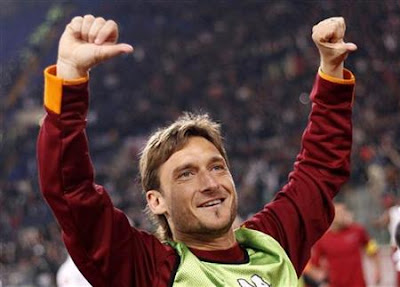 That's what Luca Toni says, and I guess it's the only hope we've got. Since Inter is one point ahead of Roma, they need to either tie or lose one of their remaining games, the most difficult of which is Lazio this weekend.
For most, it is a lost cause, considering Lazio won last weekend, and so is neither in danger of being relegated to Serie B nor is in contention for a top spot. This means that the game is wholly meaningless to them in terms of points. Considering also the animosity between Lazio and Roma, I wouldn't put my money on Lazio showing a feat of strength to beat the powerful Inter squad, knowing full-well that it would mean delivering the championship to their city rivals.
You never know though, which is why they play the games. If Lazio has any pride, they won't give the game up on purpose, but the fact remains that they are playing an Inter that is not only the strongest Italian team, but also playing very well right now.
Posted by Student in Rome at 11:06 PM No comments:

Bickering in the Italian Government...

After seeing the feud that took place this week between Prime Minister Silvio Berlusconi and House Speaker Gianfranco Fini, I am not sure if I am happy with Fini for standing up to Berlusconi, or skeptical that he's just jealous of Berlusconi's power. I'd like to say the first was true, but am leaning towards the second.
Posted by Student in Rome at 11:28 PM No comments: 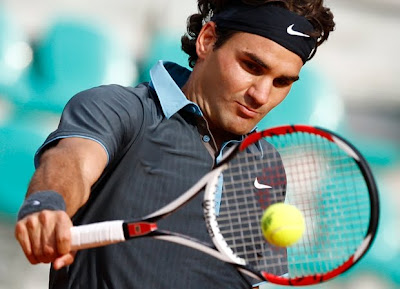 Don't miss the BNL International Tennis Tournament in Rome, which is going on now. It started yesterday, April 24th and will continue until May 8th, featuring most of the big names in tennis (Federer, Djokovic, Nadal, although no Andy Roddick).
I would recommend trying to get out to see the early rounds, since many matches will be happening at the same time, so you can wander from match to match and get the most tennis out of your ticket, whereas if you go later in the tournament you will only be able to see a few, or just one, match.
The tournament is located in the Foro Italico in the north of the city, right next to the Stadio Olimpico, where Roma plays. Search 'Foro Italico' on the google map on our main page.
Posted by Student in Rome at 11:18 PM No comments: 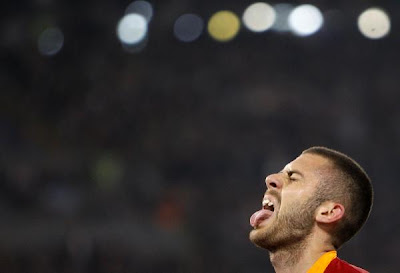 The title-hunt just got a lot harder. After our 1-2 loss tonight against Sampdoria, Inter is in charge of Serie A once again, one point ahead of Roma. All is not lost, of course, but Inter must either lose or tie in the remaining games and Roma must win them all (or at least more than Inter).
We do have an ace in the hole, however, which is that if Roma and Inter finish the season tied in points, the scudetto would go to Roma based on head-to-head competition. Let's just hope Inter tires itself out with Barcelona on Wednesday...
Posted by Student in Rome at 11:08 PM No comments: 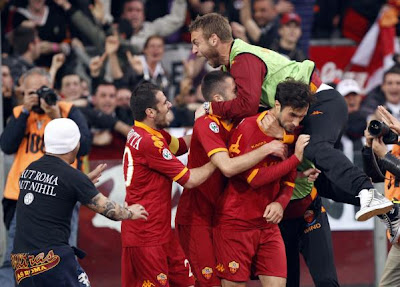 Mirko Vucinic scored two goals last night to give Roma their biggest win of the season over crosstown rival Lazio. In the derby, Lazio scored first, then missed a penalty, but when Roma was awarded one in return, Vucinic put it home. He struck again not long after on a direct penalty kick just outside the box.
With few games remaining in the season and Roma sitting on top of Serie A, the excitement in Rome is tangible. I think people were honking in the streets until about 3 in the morning last night. The scudetto is close and you can feel it.
Roma's remaining games are against relatively weaker teams, so they are in control of their own destiny now. Inter, who is only one point behind, also faces an easy schedule for the last leg of the season and are ready to take home the championship if Roma slips up.
Posted by Student in Rome at 7:53 AM No comments: 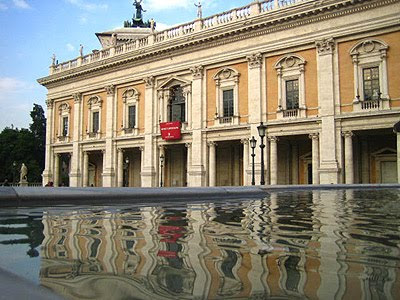 All of Rome's state-run museums will be free of charge from the 16th to the 26th, taking part in the Settimana dei beni culturali, or annual culture week. The cultural ministry is also putting on several exhibitions, tours and other events to celebrate the week.
This is a great opportunity to get out and see some of Rome's incredible art and history FOR FREE. Just be wary that you aren't the only one taking advantage of this and the lines will be around the corner, so make sure to get there early!
Here's the full article on WantedinRome
Posted by Student in Rome at 10:33 PM 1 comment: 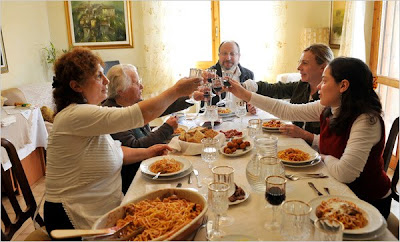 Check out this recent New York Times article about a really cool program in Italy that allows you to go have dinner with a family, to get a more authentic experience, instead of a restaurant.
Posted by Student in Rome at 7:06 PM No comments: 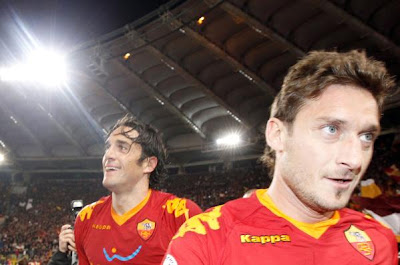 With today's win against Atalanta and Inter's tie with Fiorentina last night, Roma is now in first place in Serie A!
Next week will be the ever-heated derby between Lazio and Roma at the Stadio Olimpico, as the season winds down and Roma tries to win their first championship since 2001.
Posted by Student in Rome at 4:53 PM No comments:

"16-year old Italian Set to Make History at the Masters" 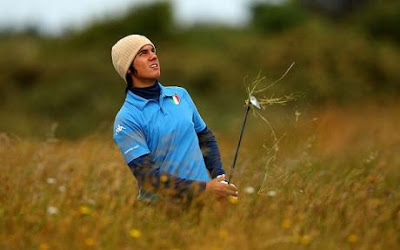 Meet Matteo Manassero, a 16-year old Italian from Verona who will be the youngest golfer ever to compete in the Masters.
Posted by Student in Rome at 12:35 PM No comments: 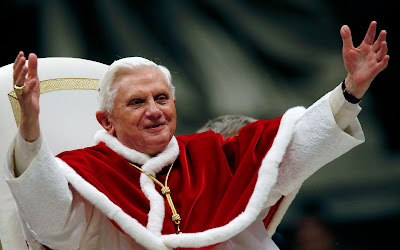 While I'd rather not comment on the actual church scandal in progress right now (the whole thing really just disgusts me, and I think the facts speak for themselves), it is interesting to see the lack of attention that it gets in Italy, or specifically, Rome. Sure, it's not absent from the papers, but there is not nearly the craze and disgust that is taking place in the rest of the world - if you haven't seen much, here is a good summary of what different newspapers are saying in the United States.
Does anyone else think it's strange that the American press, a million miles away, has more freedom (or balls, maybe) to directly confront the church on this outrageous and shameful hypocrisy?
It could be a don't-ask don't-tell kind of thing; that is, Catholicism is so diffuse here that it is uncomfortable to hear about these scandals. For devout Catholics, I imagine that it takes a while to absorb something like this.
Or it could be just more of the Berlusconi media thing; that is, Berlusconi is buddy-buddy with the Vatican and doesn't want to make it look bad. Just count the hypocrisies: Berlusconi, a right-wing, conservative values, divorced, pro-life, orgy-attending, multi-billionaire defending a conservative values, child molesting, pro-life, lying, extremely rich institution, the Catholic church (note: I have nothing against Catholicism, only people who molest little boys).
Posted by Student in Rome at 12:00 PM No comments: 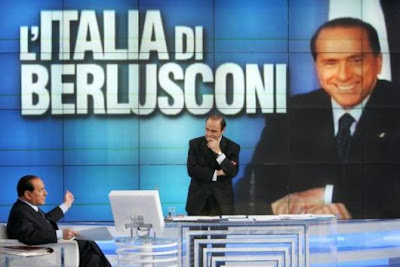 Apparently Bruno Vespa, one of Italy's most famous television hosts, agrees with me on Prime Minister Silvio Berlusconi's intolerance for freedom of the press. This is doubly significant because Vespa usually takes great pains not to criticize Berlusconi.
Posted by Student in Rome at 12:55 PM No comments: 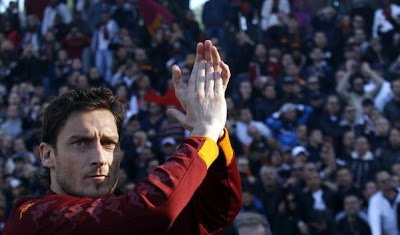 After a brief vacation for Easter, I'm back, and things are looking great for Roma. They beat Bari this past weekend 1-0, with 15,000 romanisti travelling with the team to the south of Italy. Meanwhile, Inter and Milan both won as well, so the standings have remained the same, with Roma in second place, one point behind Inter.
This week Roma will host struggling Atalanta, while Inter will go to Florence for a not-so-easy match, and Milan will host Catania.
A real story, however, is Juventus. The perennial powerhouse has lost its way recently, losing its last game to Udinese 0-3, leaving it in 7th place. This week they have imposed a "press silence," that is, they refuse to say anything or give interviews to the press.
Posted by Student in Rome at 12:36 PM No comments: 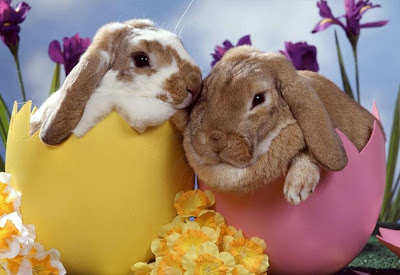 Buona Pasqua! Happy Easter! Hope you all eat well tomorrow.
Make sure to remember that EVERYTHING will be closed tomorrow and Monday. Easter Monday, Pasquetta in Italian, is also considered an important holiday. Things will open back up on Tuesday.
Posted by Student in Rome at 12:36 PM No comments: